New Soapmaking Book is Hot Off the Press. How to Make Shaving Soap

Congratulations to Carrie Seibert of Soap Commander,an industry leader, on the publication of her new book, How to Make Shaving Soap: Charting Your Course to the Land of Lather.
Posted by Rebel Fan at 12:41 PM No comments:

For the last couple of years I've been making shaving soap with grass-fed beef tallow I rendered myself.  Here I talk a little about rendering some tallow I got from one of the vendors at the Greer Farmers Market.


Some of the results of rendering tallow. 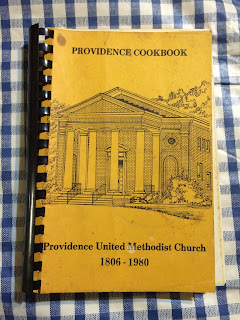 I've been thinking about sharing some of my favorite old church cookbook recipes. These recipes I'm sharing are ones we've tried and tweaked.  I'll give you my variations.  We will start with one of my favorite cookbooks from the South Carolina Lowcountry. This was Momma's cousin's church.  Those ladies of Providence were some of the best cooks I've ever run across.

It was in a farmhouse with the Four Holes Swamp for a back yard in Holly Hill, SC that I learn how to can tomatoes while all the farm hands and wives were in the packing house of the truck farm, preparing shipments of tomatoes, peppers, and cucumbers for the farmers market and supermarkets.  About the time I got a bushel of tomatoes done, somebody would pull up the sandy driveway and tote a couple more bushels up the back steps to the porch. Ugh! That was a lot of hard, hot work for a 15-year-old, canning and babysitting in the SC Lowcountry in July.

Lois, a Winthrop Home Economics graduate, grew up in Taylors, SC.  She worked for the Clemson Extension Service then married Raymond West from Holly Hill.  She was a member of the Master Farm Homemakers Guild and served as their president for a while.  Between Lois and Momma, I had some of the best homemaking instructors in SC.  There is a lot of physics and chemistry in Home Economics.  She is still serving her community by baking cakes to fund college scholarships for local young people.
Posted by Rebel Fan at 8:54 PM No comments:

We need to revive this blog.

Boy, do I ever feel bad about abandoning this blog. It lost its momentum whenever my best reader passed away. I'll pick it up here directly. I promise.
Posted by Rebel Fan at 8:10 PM No comments:

Come Learn to Make Handcrafted Soap with a Certified Instructor.

I’ve been a soap maker over 20 years and was addicted after my first attempt. Back then there was no Internet or instructor to be my guide on the side. I did a lot of footwork to find my information, elated to find the advice in Anne Bramson’s book, Soap: Making It, Enjoying It – mainly because it was the only one you could find.  This was after being intrigued by a bar of old timey lye soap I bought from a granny-lady demonstrating soap making in Pigeon Forge, Tennessee.

It was a marvelous experience to bathe with my new purchase in the claw-foot tub at the rustic cabin rental in the mountains that crisp fall weekend. My skin felt smooth and moisturized all night; it didn’t need lotion.  Instead of going shopping the next day with the other family members, I stayed at the cabin and soaked in the tub again. After that weekend, I was determined to learn how to make this miraculous stuff for myself.

I transferred this research into a culminating spring time lab for my second year chemistry students.  We crafted homemade soap for Mother’s Day presents.  Of course, they had to describe the chemical principles of the saponification process to me on the final exam.

When Creative Hands Artisan Center opened in Lyman, SC, I began to sell bars of slightly more sophisticated versions of the mountain granny’s old timey lye soap. That was the beginning of Tygerheart Fine Soaps in 2001.  Just last year, I became a certified instructor through the Handcrafted Soap Makers Guild.

With the opening of The Grain Loft on Hwy 101 in Greer, SC and their commercial kitchen, there is a great new venue for me to teach interested students the basics of soap making.  Classes are currently underway.  You can register at grainloft.com.  Soon I will be offering classes on more advanced techniques as well.
Posted by Rebel Fan at 10:22 AM 1 comment:

Have you seen my honey?

This year I'm trying to be a beekeeper.  I've been interested in it all my life because my grandparents had hives out in the apple orchard on their dairy farm in Pelzer. Nobody ever let me get around those white boxes in the tall grass though.  I watched from a distance, usually from a low branch in an apple tree, when Papa or Uncle Henry robbed the hives. Somehow I stumbled on an announcement about the Clemson Extension Office in Spartanburg offering a beekeeping class back in the winter. I signed up just to find out more.  I found out that it's a lot harder to keep bees these days than it was.  There are pests and diseases now that they didn't have back then.  I was almost turned off by the first class because it was mostly about all the diseases you have to watch out for. 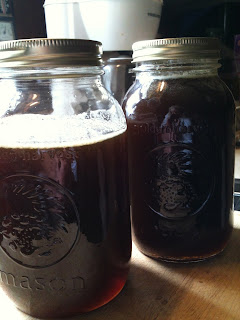 I started by purchasing two hive kits from Brushy Mountain Bee Farm in NC and two packages of Italian honeybees.  Installation day was April 6.  I pretty much left them alone for a month before I opened the hives, checking only the outside activity. In August I felt brave enough to rob a frame of honey from each hive. Here is what it looks like.
It's a very dark honey with a strong flavor.  Momma says it's the best tasting honey she has ever put in her mouth.
That's all I'm going to take this season.  I'll leave the rest for the bees to eat over the winter.  My goal this first season with bees is to get two colonies to survive the winter, start out strong next spring, make more bees, and make more honey.

The short story I wrote this summer.
Posted by Rebel Fan at 10:34 PM 4 comments:

Sometimes the creative side of me takes over, even over the soap pot. The darnedest things inspire a pot of soap. For this batch, it was who, not what. I wanted to make something to honor Marcus Lattimore's first season with Carolina, you know, back in the fall when we were all in a football frenzy. Even most of us RebelTigers were pulling for the Cocks except for our game. I know a few who weren't, and y'all are welcome to pipe up here. Then I had to give the Tigers equal effort and made an orange and purple swirl batch. So here are the results of that inspiration. 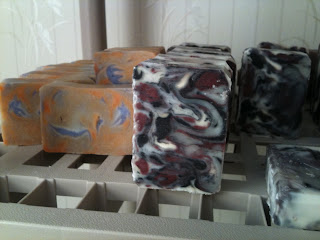 With swirls of garnet and black, Gamecock is scented with Spiced Mahogany from Bramble Berry, and described as a deep, rich woody scent with notes of Italian Bergamot, and Apple Wood to round out the darker, more sensuous Patchouli, Cedarwood, and Oakmoss. Also spices of Cardamom, Vanilla Bourbon and allspice are added. The resulting fragrance is one of sophistication and verve.

The Tiger was scented with Energy fragrance oil, also from Bramble Berry. It is described thus,a stimulating blend of citrus, including grapefruit, lemon, and lime, with hints of fresh cucumber and jasmine, and a touch of pineapple, blackberry and champagne. 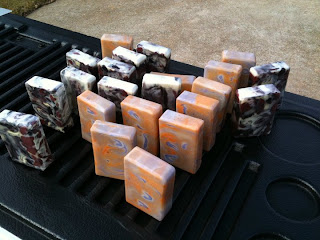 And here they are tailgating together.
Posted by Rebel Fan at 9:28 AM 4 comments:

If you're wondering why I've not written a blog post in a while, it's because I've been making soap like crazy. I've had the soaping bug for quite a long while. I don't think a bar of store-bought soap has touched my skin in nearly a dozen years. My soap is good. Take a look here at my Etsy Shop, Tygerheart Fine Soaps. Locals can get their paws on these bars at Creative Hands Artisan at the intersection of Groce Road and Highway 29 in Lyman, SC.
Posted by Rebel Fan at 6:57 PM No comments:

My Version of Carolina Gold aka Yaller BBQ Sauce

Since "yaller sauce" is getting kind of hard to find around here, I figured out this recipe after several attempts. We like it better than the store-bought kind. Put this stuff in the blender for a few seconds then store in a glass jar in the refrigerator. Shake before using.

Gary, this is the Wordle of your interview in the Smoky Mountain News.

The Exchange by Ron Rash

Good News for Me!

The good news is that I won the 2010 Hub City Award for Poetry. Click to read the article.
My youngest suggested that mine must have been the ONLY poetry entry this year. Oh, nay, nay, I said. There were prizes offered for 2nd and 3rd places as well. And the icing on the cake - I also took third place in fiction.
Posted by Rebel Fan at 12:05 PM No comments:

My students introduced me to Wordle.com. I noticed their interesting notebook covers and asked them how they made them. I put in the text to one of my previous posts, Kudzu Cousins and Lye Soap, and got this.

Then I put in Robert Morgan's poem, Honey, and got this.

Go play with Wordle.
Posted by Rebel Fan at 12:45 PM No comments:

Have you ever run across a long forgotten item or sense that reminded you of something from way way back yonder? For me, it’s smell. I would like to make an incense blend of Swisher Sweets cigars, Old Spice, line-dried flannel, the metal, oil, and weathered upholstery of an old pickup truck, cows, milk, sweet feed, and wet cement, with a high note of manure. And every time I burned it, my grandpa would aromatize out of the smoke and stay with me for the rest of the day. I would keep fishing gear in the utility room so that when he wafted in, we would head up Highway 276 to the creeks in that part of Greenville that points the accusatory finger at something over in Pickens County. Or perhaps we would take off up Old Highway 25, through the watershed area, and he would ask me to keep a lookout for that shed in the woods (it’s out there, you know), to keep my mind off the nausea that always crept up on me on our trips to see his cousins around Tuxedo and Flat Rock. But this time, since I’d be driving, I wouldn’t get car sick.
Posted by Rebel Fan at 4:31 PM 4 comments:

I went to the last Tucapau/Startex Reunion back in the spring and I promised that I would show you some of the pictures I took there. Finally downloaded them off the camera. I think this picture merits its own blog post. Below is a picture of a 1940 pay stub from Spartan Mills Startex Division. Knowing who it belonged to, I’d venture to guess that this may be a first pay check. I’ll not comment and let the numbers do the talking.

This year I plan to have a display about the early years of Tucapau in my classroom. This photo will be prominent in the display. 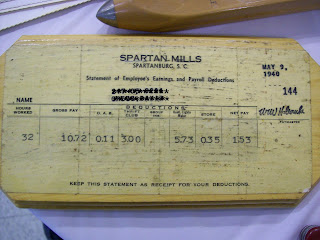 Rebel Fan
Upstate, South Carolina, United States
Howdy, I'm a retired 31-year veteran of the high school science classroom. Before that, I was in textile research a few years after graduating from college. My entire teaching career has been serving the community in which I was reared. I remember hearing when I was little that you can’t go home again, and that scared me, so I stayed put. I have lots of interests, but years ago my favorite hobby, soap making, turned into a little side business, Tygerheart Fine Soaps. Since retiring I teach soapmaking during hands-on workshops. I also write short stories and historical fiction for my children in which I try to weave in a little of our genealogy.